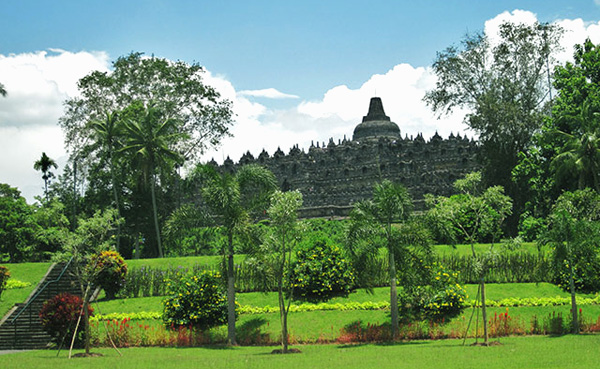 Apart from Bali, Borobudur is the most well-known cultural site of Indonesia, its iconic image is widely used to represent Buddhism or exotic of Southeast Asia which turned Borobudur to be a must see place in this country besides another interesting place in Central Java. Borobudur was built in 9th century under the reign of dynasty Sailendra and located in Magelang, Central Java. It has nine platforms, the lower part contains with six square and the upper three are circular. It has approximately 72 small stupas and one large in the central of the stupa. It also has the statue of Buddha sits inside the big stupa.

Borobudur has 2.672 reliefs that carved into its wall. The architecture of Borobudur mostly tells about the story of human being which tells about the symbol of the Buddhist universe as well known as Kamadhatu, Rupadhatu, and Arupadhatu.

The relief of Kamadhatu represents the human’s life, it describes the behaviour that still get along with the lust. It can clearly be seen right on the low wall of the temple.

The relief of Rupadhatu represents the willingness to leave behind everything about life, and the last relief was named as Arupadhatu, it’s only surrounded by the statues, it also represents that human are no longer attach with anything in life, they are free from lust and ready to reach Nirvana.

Borobudur always look enchanted and impress everyone who visit, with remarkable nuance and the great stone and stupa, this temple sometime similar to another temple in Thailand. By exploring this temple, we also learn another historical story heritage of Buddhist that also represent to Indonesia cultural a million years ago.

Look inside the Borobudur complex, you will find many interesting place inside it; it’s not just about temple and religious thing. Culture, heritage, dance, and entertainment also live inside it.

Borobudur has two museum that save many heritage stuff from its historical, there two museum, as known as, Samudra Raksa Museum Gallery, Located several meters from the Borobudur temple, this museum save many things about the first great maritime in Indonesia. This museum has three main rooms. The first room is the room for the historical ship; the room is full of the note of the story of the ship. Second room is the room for the cultural sailing Indonesia. The third room is the largest one, because the miniature of the ship is settled right on the room. The first time you step on the museum, you will be welcomed by the nuance of the Indonesia’s maritime. You can see the Original roof of Indonesia by seeing from its roof. The wooden roof and the rattan roof are sticking on the ceiling. The museum is similar to Joglo Building (the ancient house of central Java); this makes the nuance of the museum looks similar with the old Indonesians.

The second museum called as Karmawibhangga museum. Karmawhibangga museum inside the Borobudur complex, among other things, you’ll see traditional heritage things of an archaeology that part of Borobudur temple. You’ll see the ancient Borobudur and Buddhist dwellings, Borobudur architectures, Borobudur structure, also the document of restoration project of Borobudur. You can also see the process of Borobudur project during UNESCO’s conversation building. Karmawhibangga is the relief of the Borobudur temple, and it represents the realm of the desire. Karmawhibangga itself tells a story about afterlife (a cause and effect of life) or another known as torture life. On this relief, it is carved that how human’s body was being sawed and cut, burning bodies, and bondage bodies, in another hand, it also tells about good thing that effect a good things. All activities of human being are also written on it relief, or another named as Samsara, the circle of life including birth and die). When people were born, it looks like a sacred baby, still pure, and when people die, they full of lust which all of the lust will be taken a day afterlife in Karmawhibanga. Karmawhibangga, karma means act and whibangga means flow. In another conclusion, everything we acts, will be get the effect.

The karmawibhangga reliefs at the bas of the temple number only 160 out of the 1460 panels found in borobudur. The relief are located on the lowest level, Kamadhatu. On 35 panels, brief inscription are found above carvings. According to several experts, these are the key to the meaning of karmawibhangga. The episodes on the stone panels are based on the everday life of ancient java in the ninth and tenth centuryies. And it is on these that the ancient way of life is revealed, such as religious behaviour, the social structure, fashion, tools and equipment used and the flora and fauna.

Another facility that Borobudur offers is the elephants. Borobudur also offers you to go around in Borobudur temple by riding the elephants. This holly sacred animal also represents the sacred of the Buddhist. You can find the elephant riding every Morning till the day. The main characteristics of the elephant are his strength and steadfastness. There for it become a symbol of physical and mental strength, as well as responsibility and earthiness.

If you are bored of watching the stupa, you can also attend to the event of traditional dancing of Borobudur Aksobya. It will be nice to see and watch the story or legend that happened million years ago. Imagine you can go back to the ancient time, and visible to see every antique culture. Need to dream about it? Make your dream come true. Inside the Borobudur temple there is a show any kind of drama, dance from the story of as gamelan. This show tells about the story of Borobudur for ancient time, the first time Borobudur was time, the conservation until the moment when Borobudur was rebuilt. The sounds of gamelan from Java will welcome you to enjoy every moment of the history of the Borobudur. The shows also has the traditional dancing that the gesture represents of the three part of life, first called Kamadhatu, Rupadhatu, Aruphadatu, the dance tells about unlucky human that do sin the rest of their life. Then, there will be one main actor Rakai Panangkaran that will ask people to do good thing and spread the kindness and Rakai Panangkaran asks those people to build a Buddha temple as Punden Berundak. Following the plan to build the temple, it represents also the high and down of life of the people in the process of building the temple. In another hand, the king refuses to give up, and continue to build the temple till it comes the time Borobudur nestles and bless every people.

Camping ground, and Dagi hill also part of Borobudur interest
The camp ground around Borobudur temple is simply interesting place to do camping, with the magnified scenery surrounded by pine tree and other plantation. You can also do some sport activity around the camping, such as jogging, tennis and many more. When it comes in the morning time, the area will be foggy and freshly cool, this camping ground is really suitable for the group or individual, normally people do camping in this area is come along together with some groups.

In some cases, this ground camping is also available for music event, concert and another dance traditional, or Buddhist event. If you are really into sunrise things, and nature, you better go to Dagi Hills.
To go the Dagi hill you can buy the ticket from Borobudur ticket box, after we have to climb up the stairs with 204 steps. A small road winds up from the back to bring guests up to the scenic outpost by car. There are some benches on the clearing, and enjoy very atmospheric hot coffee or tea in the morning. The Dagi hill is opened from 6am to 5 pm, big suggestion; you can go there in summer time, because you will enjoy the Dagi hill scenery with outdoor surroundings.