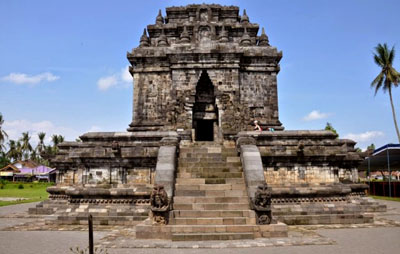 Another historical portal of Borobudur, you can find several meters ahead of Mendut temple. This temple is situated right on 3 km east of Borobudur temple. The temple is on a north to south straight line with the Borobudur and Pawon Temples. Local legend relates that long ago a brick-paved road led from Mendut to Borobudur, closed in by walls with niches built into them. According to Dutch archaeologist JG de Casparis, the temple forms part of a once huge temple complex together with the Pawon and Borobudur temples and, chronologically speaking, is the oldest among the three.

Mendut was built in ninth century with many Syailendra heritages. The 26.4 metres tall temple is facing northwest. The stairs projecting from the northwest side square elevated base is adorned with Makara statue on each sides, the side of the stairwall carved with bas-relief of Jataka fable narrating the animal story of buddhist teaching. The square terrace surrounding the body of the temple was meant for pradakshina or circumambulating ritual, walking clockwise around the temple. The outer walls is adorned with bas-reliefs of Boddhisattvas (buddhist divinities), such as Avalokitesvara, Maitreya, Cunda, Ksitigarbha, Samantabhadra, Mahakarunika Avalokitesvara, Vajrapani, Manjusri, Akasagarbha, and Boddhisattvadevi Prajnaparamita among other buddhist figures. Originally the temple had two chambers, a small chamber in the front, and the large main chamber in the center. The roof and some parts of the front chamber walls are missing. The inner wall of front chamber is adorned with bas-relief of Hariti surrounds by children, Atavaka on the other side, Kalpataru, also groups of devatas divinities flying in heaven.

Checking out the sunrise then rushing to every temple flapping in the back of a rickshaw is no way to see the beauty of Mendut. With this major tourist attraction comes a massive community and culture of vendors and children who make the temples their daily backdrop in hopes of making money for their families. George captures some moving moments with his time lapse footage mixed with meaningful portrait at Mendut spot.

Many interesting events to attend in this temple; when Vesak is held, there will be many monks that walk from Borobudur temple to Mendut temple. Buddhist devotees in Indonesia celebrated the birth, enlightenment and the passing away of the Buddha.

Although it’s normally summarised as ‘Buddha’s Birthday’, Waisak (known as Vesak in most other Asian countries) commemorates three key events in Buddha’s life: his birth, his enlightenment and his passing. And for Indonesia’s mainly Chinese-origin, Buddhist community, it’s an epic event.
The mysterious Syailendra dynasty who built this serenely beautiful temple over 1,200 years ago are long gone. And their Mahayana Buddhist faith passed with them, replaced by the complex fusions of old beliefs and world religions that characterise much Indonesian religious practice.

Unfortunately, only the monks can access the high sanctum. But I join the procession of ordinary pilgrims, and circumnavigate the ancient monument. As I walk, bright lanterns ascend, flickering into the sky, one by one, like souls liberated from the body and seeking new life in heaven.
Monks robed in colours from black to russet, from orange to gold, process around the base of Borobudur, bearing offerings of candles and flowers. Illuminated by candlelight, it’s a staggeringly beautiful act of faith. It would be high recommended to wear a modest costume the event, as we know that the Vaesak is part of religious event.

How to go there:
If you prefer to go there by bus, it would be high recommended to catch a bus from Jogjakarta to Borobudur, then you can have several steps to get inside the Mendut temple. (Mendut’s location is near from Borobudur)

Best time to go:
To have many beautiful memories and great activity during your holiday, it would be nice to visit Mendut temple at the time the event of Vaesak. The Vaaesak day will be your splendid memory in Central Java when you get along with Mendut temple. Don’t forget to feel the calm and tranquilly of the Mendut temple.