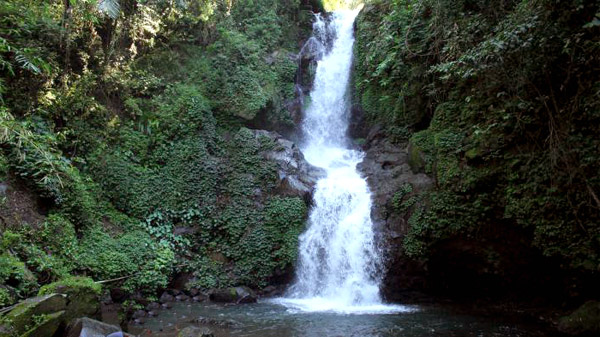 Exploring the exotic view of waterfall, feeling the nuance and the freshness of the waterfall, and witnessing the clear water and the sound of the water, will make your day unforgettable. Sekar Langit waterfall is located in Telogorejo, Magelang. You can access the place by using public transportation only from the gate area. After that, it takes you approximately 500 m route to pass. But do not worry, your trip will never be boring because the lovely panorama of the pine forest is ready for your eyes.

Sekar Langit was named after the ancient legend. The famous history is about Joko Tarub and the angels who came down to earth for having bath. The legend said, the waterfall was a place for the angles to shower and swim. Once upon a time, there was a guy named Jaka Tarub. A young and handsome guy that had a lucky day to be able to see the angles while they were playing near the waterfall. Then, he thought to steal the scarf from one of the angles. He thought that by stealing the scarf, the angles won’t fly back to the sky, so they will stay in earth. Fortunately, Jaka succeed to steal the scarf. Then when the time comes, the angles were flying back to the sky, but one angel whose scarf was being stolen by Jaka, stayed. She couldn’t find her scarf. Suddenly she lost her power and her magic. Jaka was happy, and he pretended like a normal one who was innocent and came along to help the angle, and they got married.

The famous legend of Jaka Tarub is well knows as a Central Java legend and that is the reason why many people visit this waterfall. Furthermore, the myth and the local’s belief assume that there is a magic behind it like the water is just like a medicine to cure any diseases. People believe that because it was a place of the angles so the water will be clear and holly. Therefore, they go to the river to heal the diseases.

Out of the legend, this waterfall is part of high rate must-visit-tourism in Central Java. The first thing that you may think about the waterfall is how lovable this waterfall can be, the sound of the drop water will hypnotize you, and the forest that surround the waterfall will be another plus nature point. In every morning, the birdsong adds the nuance of the nature. You can also encounter some animals that live in the forest.

How to get there:
In order to reach this site, there are two paths the visitor can access. The first is from Semarang to Salatiga. Then you can continue to head to Kopeng, but before reaching that you will be in Getasan village and you have to turn right to get to the gate of Sekar Langit waterfall. It is about 5 km from Kopeng to the waterfall and you can use your own vehicle either motorcycle or car. The second path is coming from Magelang. From Magelang you can head to Grabag and then Pandean Ngablag village where the gate exists. Arriving at the gate, it takes you around 500 meters to reach Sekar Langit waterfall.