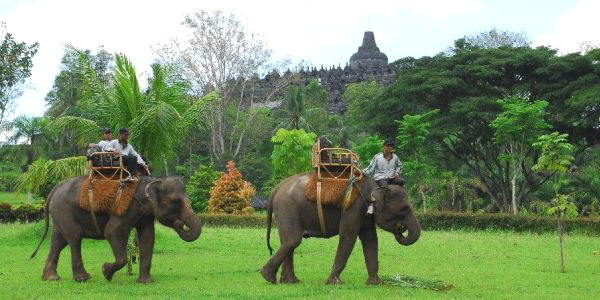 Have you ever imagined ride the elephant around the temple and feel the nuance of the Buddhist just like other similar temple in Thailand or Vietnam? Here in Indonesia we offer you to join riding the elephants to look at the gracefulness of Borobudur. Elephant is a sacred animal and it has its own meaning.
The main characteristics of the elephant are his strength and steadfastness. There for it become a symbol of physical and mental strength, as well as responsibility and earthiness.

In Indian mythology we hear about the flying elephants and Airavata, the white elephant who become the vehicle of Indra and appeared from the churning of the milky ocean. Therefore white elephants are considered very special and with the power to produce rain. They are identified as rain-bearing clouds, which will explain the belief in the flying elephants. In Indian society elephants were considered to bring good luck and prosperity. They were owned by the kings and used in wars.

In Buddhism, the elephant is a symbol of mental strength. At the beginning of one's practice the uncontrolled mind is symbolized by a gray elephant that can run wild any moment and destroy everything on his way. After practicing dharma and taming one's mind, the mind which is now brought under control is symbolized by a white elephant strong and powerful, who can be directed wherever one wishes and destroy all the obstacles on his way.

Buddha Shakyamuni was born as elephant in some of his previous incarnations. Also in his last incarnation as Siddhartha Gautama his songs: descended from the Tushita pure land and entered his mother's womb in the form of a white elephant.

In Buddhist iconography we find the elephant-faced deity Gangpati or Ganesh as an emanation of the bodhisattva Avalokitesvara. Also in another aspect, representing the worldly aspect of the same energy he is trampled upon by some other deities such as Mahakala, Vajra Bhairava and others. In the mandala offering ritual one offer to the Buddha the Precious Elephant, with the strength of one thousand elephants and who can circulate the whole universe three times in one day. Also the elephant tusks are one of the Seven Royal Emblems.

The elephant is the vehicle of the Tathagata Aksobhya and the deity Balabadra. The elephant also appears as a guardian of the temples and of Buddha himself.