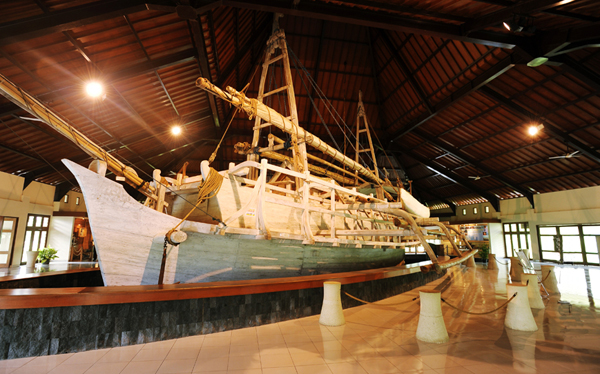 A million years ago, the Indonesians were sailing across the Hindia Ocean to go straight ahead to Africa, as called as the cinnamons line. According to the history, the cinnamons line was created because of its famous product of Cinnamons. The ancient people used to sell and buy several kinds of spices across the country and continent.

This first discovery of the ship were created by Philip Beale, he was an English marine before. Philip visited Borobudur temple, and got surprised by the relief of the temple that told and described about the greatest of Ancient Indonesians were sailing across the world. In another case, this greatest story about the sailing is already described by James Inner Miller (1969) on his famous book titled The Spice Trade of The Roman Empire. Philips Beale decides to build the same ship just the same as the ship on the story, and he started to build the ship.

Philip Beale built the same and the exact large as the ship that carved into the relief of Borobudur. The ship is 18.29 meters long, and it has 4.5 meters width. By the two sides, it has two oar or pedals, but sometimes Beale described that the ship only used the sails to balance the ship. The ship sailed only used the wind. As the wind blew, the distance would come.

This ship was legitimized by Megawati Soekarno Putri in the Marina Ancol beach, Jakarta in 2003. The ship was named as Samudra Raksa, another meaning as the rangers of the Nusantara, the one who guard the sea of Indonesia. Then, the ship becomes the heritage of Indonesia. The ship was sailing more than 10 miles across the ocean.

The Nuance of the museum
Located several meters from the Borobudur temple, this museum has three main rooms. The first room is the room for the historical ship; the room is full of the note of the story of the ship. Second room is the room for the cultural sailing Indonesia. The third room is the largest one, because the miniature of the ship is settled right on the room. The first time you step on the museum, you will be welcomed by the nuance of the Indonesia’s maritime. You can see the Original roof of Indonesia by seeing from its roof. The wooden roof and the rattan roof are sticking on the ceiling. The museum is similar to Joglo Building (the ancient house of central Java); this makes the nuance of the museum looks similar with the old Indonesians.

How to get there
This museum is in the area inside the Borobudur temple, to get to the museum, you can walk along to the west area of the museum, and then you will see the joglo house nestle to the side area of the temple.

When to visit
The museum is open start from 8 am till 2 pm, so before leaving the temple, make sure that you already visited the museum.