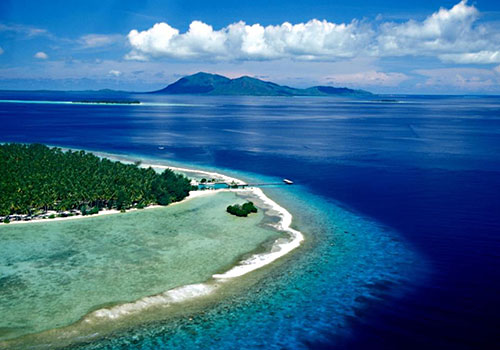 Central Java Province, as one of the Indonesia tourist destination areas, offers various kinds of tourist attractions whether natural, cultural, or man made features. Central Java is located exactly in the middle of Java Island. It borders with West Java Province in the western part, while in the eastern part borders with East Java Province. On the part of the southern side lies also the province of Yogyakarta Special Region. Central Java is the island's cultural, geographic, and historic heartland. Universities, dance schools, pottery, handicrafts, textiles and carving, give to the region a rich culture and interesting shopping. This is also the place of the famous Javanese temples of Borobudur. But it is not the only ones to be noted; Dieng plateau and Sukuh temple are worth a visit. Performing arts is still widely practiced, and traditional dance dramas (Wayang Orang) or shadow puppets (Wayang Kulit) performances are easy to find. Mountains cross the entire central portion of the province. The cool slopes contain numerous hill resorts (Tawangmangu, Kaliurang, Sarangan).

The very first Moslem kingdom on the island was founded in 1511 at Demak, about 40 km from Semarang. Today Demak is a sleepy little town, however, its glory of the past is still visible from one of the major relics, which is still well preserved. The Grand Mosque, a quaint blend of Hindu and Islamic architecture, still honored and worshipped by Javanese pilgrims. Surakarta, better known as Solo, is the cradle of Javanese culture in the province. TV courts of Solo embody the noble value that the Javanese attach to grace and refinement, with majestic ceremonies and royal festivals still held with great pomp and circumstance. Although no longer the seat of power it once was, descendants of the royal houses of Solo are regarded as leaders of, Javanese culture and traditions, upholding standards of sophistication and conduct.

The rich and fertile plains of the region support an enormous population of over 30 million people. The low land plains are found alongside the northern beaches. The high land plains are found in the Center of Central Java with mountains stretching lengthwise from the west to the east with a line of mountains, such as Mount Slamet (3,428 m), Mount Perahu (2,585 m), Mount Sindoro (3,135 m) Mount Sumbing (3,321 m), Mount Merapi (3,142 m), Mount Ungaran (2,050 m). Near the border with East Java Province is Mount Lawu (3,265 m), while on the northern side there is Mount Muria (1,602 m). At the feet of these mountains will find pleasant and cool highland plains with beautiful panoramas such as Baturaden, the Dieng Plateau, Bandungan, Kopeng, Tawangmangu, Solo, etc. Apart from these mountains there are some small mountains and lime mountains. The Biggest Rivers found in the Central Java are Serayu River, with its source from the Dieng Plateau and "Bengawan Solo" River.