What You Will See Inside the Chicken Church in Magelang 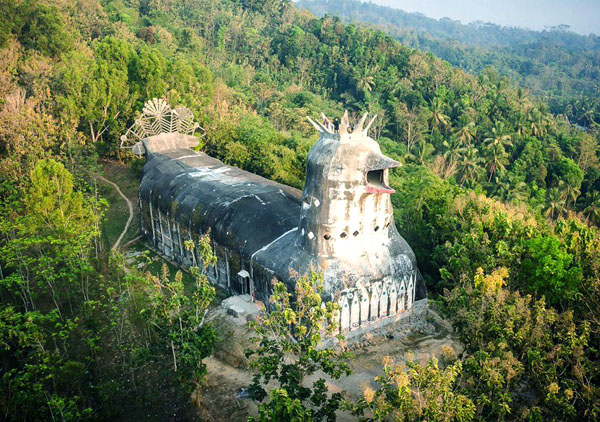 What is your First impression about the word chicken church? Nope, it is not about the chicken that is living inside the church, here one uniqueness about Central Java. As a normally known that church is a place for Christian either Catholic people to pray, but historical said there was a church that looks similar like a chicken. Daniel Alamsjah, an Indonesian people, had a dream that ask him to build the church that looks similar with the pigeon, and as the time goes by, he had the dream come true, he built the church that looks like pigeon, but people believe that wasn’t a pigeon, that’s apparently a chicken.

The chicken church is famous across the international country, many tourist come to the church to see the magic and the uniqueness of the church.
This church is located near from Borobudur temple, only 2.5 km from Gombong Magelang, Central Java.

Other great place to visit near the church is you can reach up the corner of the head of the chicken and watch the scenery over the top. You can see and realize how beautiful and magnificent Indonesia. Now the church becomes the most high rate place to visit, by yourself, together with your friends or with your family. And because of its famous, many people go visit the church every day.
The great stone building of the church represent the high Daniel’s expectation of how we are as human have to get close with the God.

How to get there:
To go to the church, you have to take a mini bus, or you can go by motorcycle, or you can go by catching up the bus from Borobudur bus station and continue by riding Ojek with the cheapest lowest price.

Best to go:
Best time to go the church is when it comes to the dry season or summer, because of the slippery and wet route when it rains.