Mountain See Sighting from the Peak of Ketep pass 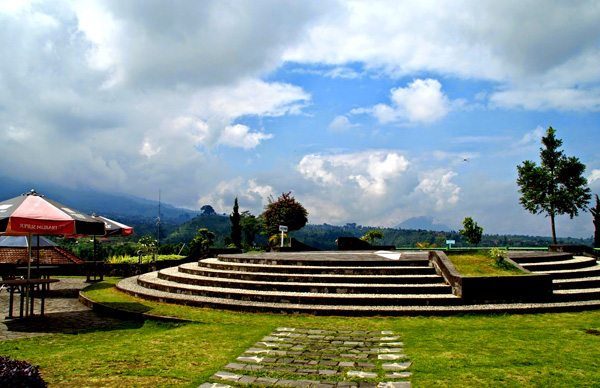 Central Java is surrounded with many volcanoes and mountain, including the Sumbing and Sindoro mountain. Can you imagine watching and enjoying those mountains at the same time and at the same point? The Ketep pass. Ketep pass is a public tourism which is located in Ketep village Sawangan. The visitors can see directly through the mountain. If you go there by bike, there will be your main advantage, so the scenery will be seen directly right through the eyes. Ketep pass is located at an altitude of 1,200 meters above sea level, with the coordinates of 7 ° 29'38.65 "south latitude and 110 ° 22'55.52" east longitude. About 30 km from the town of Magelang, 35 km from Boyolali and 32km from the city of Salatiga. The place also can be reached with various kind of transportation such as motorcycle and bus. The most beautiful yet picturesque thing that you can enjoy in Ketep pass is the big mountain of Merapi. From the side of the Ketep pass, you can go for walk to adore the beauty of Merapi, inside the Ketep you can find the ancient collection of Merapi.

Ketep Pass has various activities and facilities inside the place. There are museum, movie theater, Gardu Pandang, Panca Arga Teras, the parking park, and restaurant, all these facilities are well managed by the government, to keep the improvement of the Magelang Tourism.

What’s inside the museum?
The museum which is known as Museum Volcanic Merapi, has approximately 550 meters of the width. Inside the museum, it comprises many things about the past eruption of Merapi, the piece of the stone from Merapi, and the miniature of Merapi. As the history told, in 2006 Merapi had the greatest eruption. It took many victims of the eruption. One big bunker was famous after the eruption, and it had own history that told about the victim. Hence, the government take a lot of respect on it, then they decide to collect all the eruption things inside the museum. By visiting the museum, hopefully all people can appreciate and take more respect to the victim.

A movie theater
Inside the Ketep pass, it is also facilitated with the movie theater. The theater always plays the documentary of Merapi, and also plays the documentary of the eruption that already happened to Merapi. This mini cinema is a bright idea to introduce the visitors about. Although the building serves like a small cinema but the capacity has 78 seats that available for the visitors.

What is Gardu Pandang?
Gardu Pandang is a place that located on the top of the Ketep pass, that is facilitated with the Gazebo to relax your day, or maybe for enjoying your tea while having nice conversation with your beloved ones. From the Gazebo, you can see all of the scenery of the Merapi, Merbabu, and other volcanic mountains.

How to go there:
The access to go to this Ketep Pass is relatively easy. There are three recommended routes that will lead the visitors to reach this site named SSB (Solo – Selo – Borobudur). When you are heading from Yogyakarta, you can go to Muntilan and then Magelang. Reaching Gulon, you have to turn right and continue the trip to Ngadipuro, Senowo, Sawangan, and Ketep respectively. It takes you for about one to two hours till you arrive there. Another route you can opt from Yogyakarta is from Mungkid and then you have to turn right to Pagersari, Gondowangi, and Ketep. That would take you two hours. If you are starting your trip from Surakarta (Solo), do follow the route to Boyolali – Cepogo – Selo – Musuk – Ketep Pass. From there you can reach Ketep Pass only in 45 minutes. Another route is from Semarang. As the matter of fact, this route will challenge you due to its extreme track. You have to head to Salatiga and approximately half and an hour you will pass Getasan, Kopeng, Ngablak, Pakis, and finally Ketep Pass.