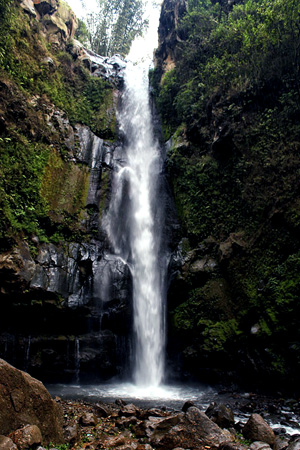 Located in the tropical forest of Indonesia, Kedung Kayang is settled right in the 19 km from Blabak – Boyolali, near the Sawangan tourism, 3 km from Katep pass. This Waterfall wont disappointed you with the panorama and its scenery. As the legend said, this waterfall is coming from two different mountains, they are Merbabu mountain and Merapi. The height is reaching approximately 39 m and 950 metres from the sea. To get to the waterfall, the visitors should hike normally one hour, but no worry, the route is basically easy to reach and to hike.

Getting closer to the waterfall area, the sound of the water falling down is approaching the nuance and the area. It is relatively safe for those who would like to have a fun under the waterfall. All of your fatigue will be faded everytime you see the waterfall and its peacefulness. This waterfall is nice and worth to visit.

There is hidden secret inside the waterfall area. It is huge cave that magically believed as a cave with no way out. If someone gets inside the cave with lust and unholy heart, they will be difficult to find the way out. Years before, people tended to use the cave as the place to do meditation in order to get the prosperous and better life, but right now, that belief is already fade away.

Compared to other natural tourisms in Magelang, this waterfall is one of the most visited spots. Kedung Kayang waterfall offers you with the highly industrial tourism. It has its uniqueness and its characteristic that you won't find in other places. This waterfall also has 3 main sources of pure water that come out from the stone that settled in the waterfall. The beauty of the waterfall is well mixed with the myth which becomes legend. In every Suro ( the holly month of Javanesse ) people usually hear the gamelan music that gigle inside the cave. Those magic thing is what makes people belive about the magic of the waterfall.

Last but not least, if you want to visit the waterfall and unwind the stress of urban busy life, you have to keep aware with the weather, sometimes in the raining season, there will be huge water in the pond, that will be dangerous for the visitors. Try to visit by the begining of the September ( in the middle of raining season and dry season)

How to go there :< br /> To go to the waterfall is normally easy to reach, you can go by your own car or go with the public transportation. The entering gate is located in Salatiga city or Boyolali.< br /> If you have a plan to use public transportation, there are two route that you can go. For the first route, you can get into AKAP bus, and get off on the paper factory as well known as Blabag, and continue to the Sawangan. then you can continue to Jrakah. < br /> For the second plan, you can get off to the Muntilan bus station, and go to Talun market, then continue to the Jrakah.

After arriving in the first gate, you can go straight till you find the parking area, approximately 100 meters from the main gate. Afterwards, to go to the waterfall, you have to walk and hike 15 minutes or maybe 200 meters.