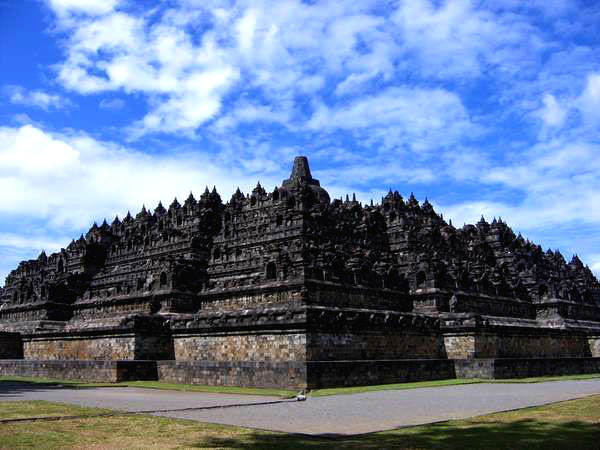 Apart from Bali, Borobudur is the most well-known cultural site of Indonesia, its iconic image is widely used to represent Buddhism or exotic of Southeast Asia which turned Borobudur to be a must see place in this country besides another interesting place in Central Java. Borobudur was built in 9th century under the reign of dynasty Sailendra and located in Magelang, Central Java. It has nine platform, the lower part contains with six square and the upper three are circular. It has approximately 72 small stupas and one large in the central of the stupa. It also has the statue of Buddha sits inside the big stupa. Borobudur has 2.672 relief that carved into its wall. The architecture of Borobudur mostly tells about the story of human being which tell about the symbol of the Buddhist universe as well known as Kamadhatu, Rupadhatu, and Arupadhatu.

The relief of Kamadhatu represents the human’s life, it describes the behaviour that still get along with the lust. It can clearly be seen right on the low wall of the temple.

The relief of Rupadhatu represents the willingness to leave behind everything about life, and the last relief was named as Arupadhatu, it’s only surrounded by the statues, it also represents that human are no longer attach with anything in life, they are free from lust and ready to reach Nirvana.

The Nuance
Along with Taj Mahal and Angkor, Borobudur makes the rest of Southeast Asia almost magnificent. This temple has survived the grand eruption and massive earthquake that happened in 2006. The Borobudur is probably one of the three most iconic WHS. It will be surprisingly beautiful if you go at the Sunrise, you will see the light of the blue sky and the dark sky mixed, with the Buddhist atmosphere. The first sight of Borobudur was a big surprised for us as we expected Borobudur to be gigantic likes Great Stupas in Anuradhapura of Sri Lanka, but the structure is still big enough and not totally destroy our imagination. The size of Borobudur reminded me lesser complex of Khmer Civilization of Angkor Wat or Pyramid of Maya in Mexico.

When we approached near Borobudur, the blackish of the whole structure made we felt a bit bore on its overall visual design. The colors of tourists’ dresses who walked on Borobudur’s upper area were far more eye-catching! Then the guide will show you the first floor of the whole complex which full of beautiful cravings depicting stories of Buddha and many Buddhist legends. The quality of art is magnificent, really beautiful and in the same part of great mural of Angkor and Ellora. If you have a moment to visit Borobudur at sunrise time, you ought to be very surprised with the most beautiful scenery of it.

Inside the temple complex, it also has museum of the archaeology as known as museum Karmawibangga which is located not more than 1 km from the temple. Inside the museum you will be presented by many collection of the temple. We must remember the earthquake that occurred in 2006, this earthquake destroys many part of the stupa, and that stupa were taken and saved in the museum. If you still have time to go around inside the Borobudur complex, it will be necessary to visit and come in to another historical museum, you will need extra energy to walk to the museum that located in the west of the complex.

Samudra Raksa museum or another word as Grand Ocean museum, it shows the historical boat of Borobudur. You should not be worried to put some cash to go into, the entrance ticket is already charged for all of part the Borobudur complex.

Take a look behind the temple, the large and green rice field are spreading across your eyes, some farming activities always show up every morning mostly till the end of the day. Legend said, if you believe in magic, a great and big white palace will come up to show its magical nuance, luckily this rare thing will happen to the one who strongly believe in myth.

When to go
In Borobudur temple, there are many events that worth to attend, especially when the Vesakha day informally called as Budha’s birthday, normally it will be held in the middle of May till June. There will be some activities in Borobudur to celebrate that day.